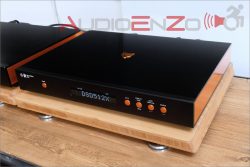 At the end of my writing about my experiences with the Holo Audio Serene Level 1 pre-amplifier, I already secretly threw it in the ring, the term Kitsune, also shortly referred to as KTE. Holo Audio has released upgraded versions of various devices, which are of the highest level and are called Kitsune, which is Japanese for Fox.
The Kitsune editions feature better components on crucial points. During waiting for the Serene KTE version, the KTE version of the Holo Audio MAY dac was available a little earlier, a dac that was converting data to music in the form of a Level 2 edition here in the AudioEnZo house. But a KTE version is of course no less welcome.

What is different in the Level 3 KTE version compared to the Level 2 edition that was previously in the audio box? Well, there are quite a few differences in hardware, a summary of what is better in the KTE edition: 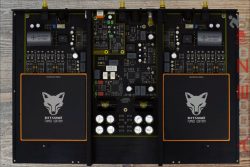 So, a nice list of adjustments that should push the MAY dac to even better performance. The big question is, of course, whether all those adjustments will indeed get that done. The general idea with audio equipment is that it is not possible to make a good judgment so cold out of the box, because the sound can still change in the course of the first hours or days. I myself have indeed experienced this with a number of devices and therefore wait ample time before writing down my experience. So I let the MAY KTE dac play for 24 hours for a few days, just left the power amplifiers off. In this way it played almost 200 hours after eight days and that is usually sufficient in my experience.

A device like the MAY dac is built according to a certain philosophy, both in terms of circuits and components. It is therefore quite special that there are three qualitative levels of this special dac. Even now it is quite bizarre to hear that with the same circuits, but with improved parts, such an improvement can occur. I am not talking about change on purpose, the character of the sound is identical but rather about improvements. 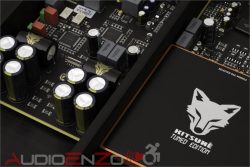 The sound of the MAY Kitsune has a very nice fusion between tranquility and yet open and detail, so retaining character and tranquility, but now with even more insight into the music in terms of placement, involvement without causing any stress. This can be clearly heard when sounds decay, but also the better transients, making the timbre of instruments perfectly recognizable and everything sounds very natural. The overall experience is a very nice authenticity, which makes the textures of instruments appear very natural, more realistic or simply more real. What is also striking is that at low volumes a better feeling of drive and slam emerges and that is a special experience. A fierce blow to a drum is usually experienced as a fierce blow at a higher volume, but now with the MAY Kitsune dac you already experience at much lower volumes that there is energy in a recording. What is also striking is the improved layering in the entire soundstage and placement gets a new dimension in the depth and width of what is happening in front of your ears. It is precisely those subtle micro details that can cause this that are given all the space. 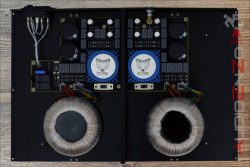 The above is my experience in a few days of intensive listening and making notes, but usually that listening period is longer before I put it online. However, something happened that I had not anticipated so quickly: in addition to this Holo Audio MAY Level 3 KTE dac, another Kitsune machine with a fox logo was lugged into the AudioEnZo house, namely the Holo Audio Serene Level 2 KTE pre-amp. And since it 1 on 1 replaced the Serene Level 1 and also came new out of the box, I could not help but let it burn in and then continue listening to both this beautiful MAY KTE dac but also the Serene KTE pre-amplifier. So to be continued …..